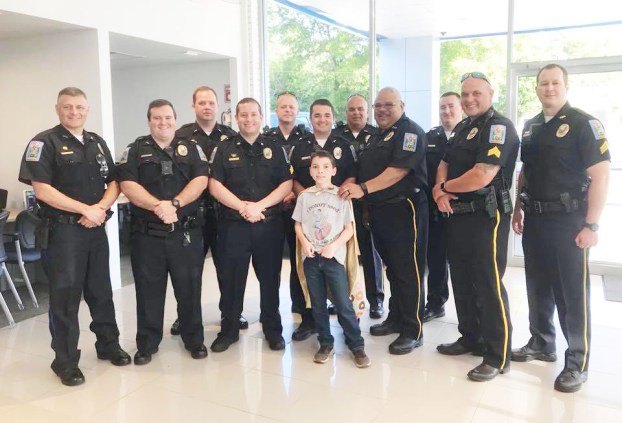 It’s bird, it’s a plane no it’s doughnut boy to the rescue. Tyler Carach also known as doughnut boy is on a mission and his mission is to have an impact on every police officer in America. Tyler was in Brewton Friday thanking officers from Escambia County Ala, Escambia County, Fla. and Santa Rosa County. His event was held at Peach Chevrolet. Tyler is a 10-year-old, and he attends Bernville Elementary School. When he grows up he wants to be a k9 officer, because he loves to help people and he wants a dog, he said. Tyler’s goal is to thank every law enforcement officer in America and give them a doughnut. He is doing good traveling to 27 states and delivered more than 50,000 doughnuts in 18 months thus far, with the help and support from his mom Sheena Carach. Tyler said, “One day me and my mom was in a corner store and saw four cops and I asked my mom if I could use my money to buy them doughnuts. They keep us safe so I wanted to do something for them.” The response from the officers led Tyler to want to give doughnuts to every cop in America. Sheena said there are more than 900,000 cops in America and to start small. He said, “Ok but I’m still going to give them all a doughnut.” Tyler had the honor to be on the Steve Harvey show and talk with Steve. Tyler said do you want to hear a joke Steve. Tyler said, “What did the hat say to the hat?, You stay I’ll go on ahead.” Through his mission Tyler has been a lot of places and seen a lot of things. He saw his first wild seal in Massachusetts, went ice skating, rode the NYPD harbor boat to the Statue of Liberty, got to wear a bite arm, rode in the Batman and Robin slingshot mobile, flew in a helicopter in Long Beach, Calif and saw a 12 foot long shark. Sheena said, “The officers are excited, happy and grateful for what he is doing. They show appreciation and are thankful, because everybody loves to be appreciated. Especially since they put their life on the line, and everything they do is important. Sheena was a law enforcement officer a few years in Virginia. Tyler’s uncle is currently with the U.S. Marshall Service and he has a cousin who is a New York State Trooper. “I feel like I’m doing something great for the officers, and I want to inspire other people to thank them, because they protect us,” Tyler said. By the end of the summer Tyler and Sheena will have been to 38 states. Everyone in the country calls him “The Doughnut Boy Tyler” now. Tyler’s slogan is “I donut need a reason to thank a cop.” You can follow Tyler’s mission on Facebook @idonutneedareasontothankacop.