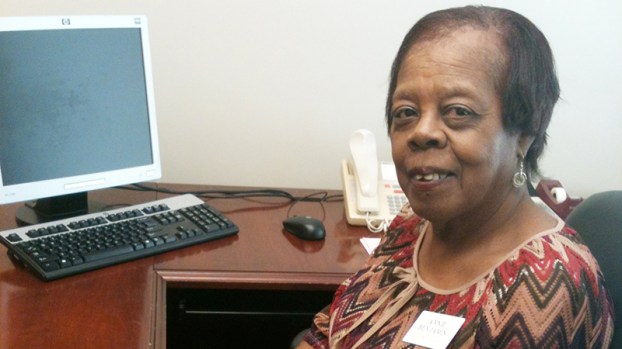 Annie Benjamin, a teller at Regions Bank, won a Best of the Best category. Lydia Grimes | The Brewton Standard

A few weeks ago the Best of the Best people were selected by the readers of The Brewton Standard. This is a contest that is run by the newspaper to determine who gives the best service in many categories.

One of the most recent winners was Annie Benjamin who works the drive-through at Regions Bank.

“I guess I see more people than most every day,” she said. “I like working the window and lots of people come by each day.”

Benjamin must be doing something right as this is the second time she has been selected for this recognition.

“I didn’t know anything about it until someone told me that I had won,” she said. “It must mean that I am doing something right. I know that I have been at it a long time and have enjoyed the work. I have been with Regions for a long time.”

The bank she refers to has also been around a long time, and the name on the building has also changed several times. At the time she began working there, it was known as Altus Bank.

Benjamin was born and raised in Brewton. She, and her four sisters and one brother, grew up in this area. They attended Southern Normal High School and she was a 1966 graduate of the school.

She had her mind set on going into special education so she was enrolled at Grambling University in Grambling, La.

“I thought I knew what I wanted to do, but I had a councilor to tell me that I didn’t have the heart for that kind of work. I was too tender-hearted to work with children with problems,” she said. “She suggested I go into something else.”

Benjamin did do something else. She left college and went to Detroit, Michigan where she had some relatives living at the time. She got a job at Wayne State University and soon she had acquired a husband and they had two children.

“After a few years, I knew that I did not want to raise my kids in Detroit,” she said. “I left my husband there, came home to Brewton and was able to get a job at First National Bank.”

She worked there for the next 10 or 12 years. She met and married Willie Benjamin, who was working at CSX at the time. They were married and moved to Montgomery. After about three years, they left Montgomery and came back to Brewton because of the amount of time he had to spend traveling with his job. He took a job with the Escambia County Sheriff’s Department and then at the Brewton Police Department. She was able to get on at Regions Bank and she has been there for many years. She and Willie had a daughter, Tai, who joined the other two children, Topeka and Fred. Except for a time Willie also worked with the Poarch Creek Police Department but he is now working some hours at the Brewton Police Department. Today they have the three children who are all grown and live in Missouri and Georgia. They have 10 grandchildren and they all gather together with the old family twice a year here in Brewton.

“I usually do most of the cooking and we have already booked the Fischer Center for this year’s Thanksgiving dinner,” she said. “My dad enjoys it so much that I want to keep it going. It means the world to him.

“Willie and I are both old enough to retire, but it hasn’t been the right time yet,” she added. “I enjoy what I am doing and I meet a lot of new friends as well as the ones I have known for years. I really enjoy the relationship with my customers.

“I don’t travel much, but I have told all my grandchildren if they will stay with it and get an education, I will fly to see them graduate. So far I have been able to keep my promise.”